#walkthevote is a non-partisan movement of activists, organizers, technologists -- ordinary people of all stripes -- coming together to help voters across the country drop off their ballots in person. We are a group of committed citizens working with local community leaders across the country. We talked with Lina Srivastava, one of the organizers.

Voter suppression tactics coupled with a pandemic certainly are an awful combo for a democratic process. Is it fair to say you are forming in response to that?

Yes. I'm part of the core creative team behind this effort called 'walk the vote'. It's a group of people who have come together in response to voter suppression, and also, in response to the fact that this election is marked by problems with COVID transmission. Many people are afraid to go to the polls in droves on November 3rd.

While there are other options to vote, since the US Postal Service has been crippled, voting by mail becomes a little more dicey. In response to that, and also to create more joy, more excitement around the act of voting, we decided to launch #walkthevote! It's been really interesting. I don't do electoral organizing, I've never done electoral politics. So this has been a huge learning curve. It's been amazing.

So how did you get involved with #walkthevote?

There's a creative team that's wide-ranging now, but the first couple people who started this were Roy [Bahat] and Kevin [Slavin]. Kevin asked me to join, because a lot of the work that I do is in narrative design and narrative strategies for human rights and international development, and also in terms of social movements. So there was some overlap of skills needed for the project. I've been wanting to get involved with this election -- it's really important to me -- and so I said, 'Yes'. And then I pulled in a colleague of mine, James Carter, who has actually done interactive walking events as part of his curation and creative practice. And so we all started working together.

What's the mission of #walkthevote?

Number one, we want to look at voting as a collective community act, as a way to engage civically, to care for your community. The project is non-partisan. Anyone who wants to vote can join. We know that voter suppression is happening, and there are difficulties around voting because of COVID, because of what has been done to the Postal Service. So we wanted to respond to that. But more so, we want to sort of create a sense of event, a sense of celebration. People are feeling a lot of pressure, there's a lot of tension, and people are experiencing fear for very good reasons. And so this is a way to sort of think through how this might be a little more joyful.

That's a great way to look at it, trying a new perspective of, rather than, 'Oh, how am I going to vote?', 'I feel like making a celebration of it.' That's really nice.

And there's safety in numbers. Obviously, you'll be socially distanced, but you can still also turn this into an event! I remember during the primaries seeing those long lines of people in the rain, six feet apart. The sacrifice and the gorgeous commitment was amazing.

But also, it's important that people celebrate the act of voting and participation.  I want to be able to see people getting cheered. So one of the things we want to do is: When people walk up and drop in their ballots, they get a cheer. It's a good contrast to the act of voting as sacrifice and really, voting as a foundational piece of democratic participation should not be this hard. It should be the easiest entry point, right? It should just be, 'This is your first entry point. And then you get to participate in a huge range of ways'.  But it's way too hard in this country. As a personal example, I was helping my parents create their voting plan this year. They vote every four years, they're registered, and then all of a sudden, one of them wasn't in the database. It was astonishing. And a needless problem they had to fix.

Indeed a lot of records got purged.  What states are you folks focusing your efforts in?

We're looking at swing states particularly. For our launch this past Sunday, two walks happened in Michigan, in Detroit and in East Lansing, and there are more happening in Michigan. We're looking at other swing states as well, like Arizona, Alaska maybe. But any state, anybody can do it. So we're encouraging people to set them up any day, any time, whatever works for the particular locale.

The New York Times wrote about us last week so the campaign is gaining momentum. And we're doing outreach to nonprofits and potential captains (captains are the people who organize and lead the walks).

The democratic process is also hindered by the insane amount of misinformation being spread, how are you managing it?

With #walkthevote we're trying to equip the captains themselves. We've created a set of tools for them and we are encouraging them to make sure that they check in all the time with accuracy of information and pass that along to walkers. We encourage them to make sure to know what the regulations are in terms of gathering numbers, to keep checking where drop boxes are, when they're open, when you can do drop offs -- essentially to make sure all of that information is there. If the captain has a problem, they can write back to us and we try to fix that problem in terms of accuracy of information. #walkthevote is part of a spectrum of projects, hopefully, that are meant to take on voter suppression in this way. We're not looking at misinformation directly. But we're trying to give people tools to engage in the act of voting, despite the obstacles. I think misinformation, disinformation is a larger problem that we're gonna have to tackle in the future.

Number one, go to the website, which is wewalkthevote.com. You can sign up there to organize a walk.  We're also using mobilize.us for organizing. So you can sign up to lead a parade or walking event- in any way you want to. If you want to do it silently, if you want to do a party, or in costumes for Halloween, whatever you want. It's a celebration! Those who sign up to become the captain, they get a set of resources, a toolkit, basically, to help them set it up.

If you just want to walk, and you want to see if there are places in your community where people are walking together, you can go and there's a list of walks there. And if you don't see it, then organize it yourself.

We don't have centralized social media, but we're pushing it out on social media through all of our accounts. And we have a hashtag #wewalkthevote. People can also check out and share Roy’s piece on his medium page.  We definitely want people pushing out photographs and videos (with permission of course), using the hashtags so that people can see the events and the joy around the act. And to make sure they cheer when people drop the ballots and film that!

What do you want the world to know about #walkthevote?

I want people to sign up to join or to lead. I want people to know that voting, especially in this environment, can be safe, can be itself an act of survival and act of using and expressing your voice. And it's an act of celebration of community.

What we want is for more and more people to sign up and do it, and to spread images, spread joy, and get people inspired to vote.  We have to protect the right to vote.

It's our right. But we've got to fight to protect those rights. It's absolutely crucial. Because even if it's an inherent right, people try to take it away from us. And if we don't fight for them, to just preserve them, they'll be taken away.  So we're throwing parties, by walking to vote. But also the underlying message here is: this is your right. You should be able to do this in community. Do this together, celebrate it, but make sure you do it.

For misinformation training and awareness we highly recommend the 2 week SMS course by First Draft! In Spanish and English. 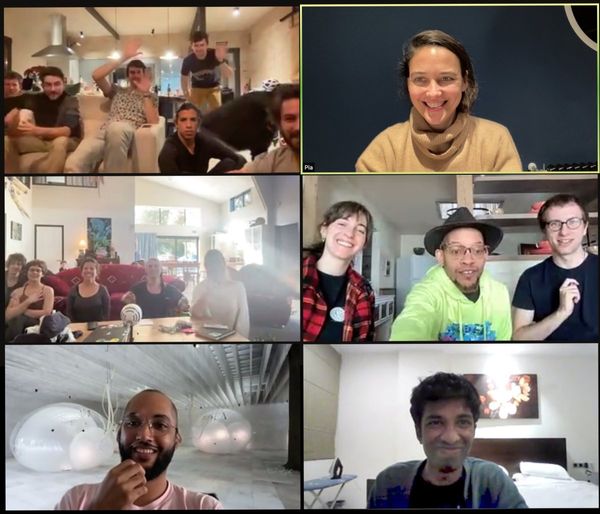